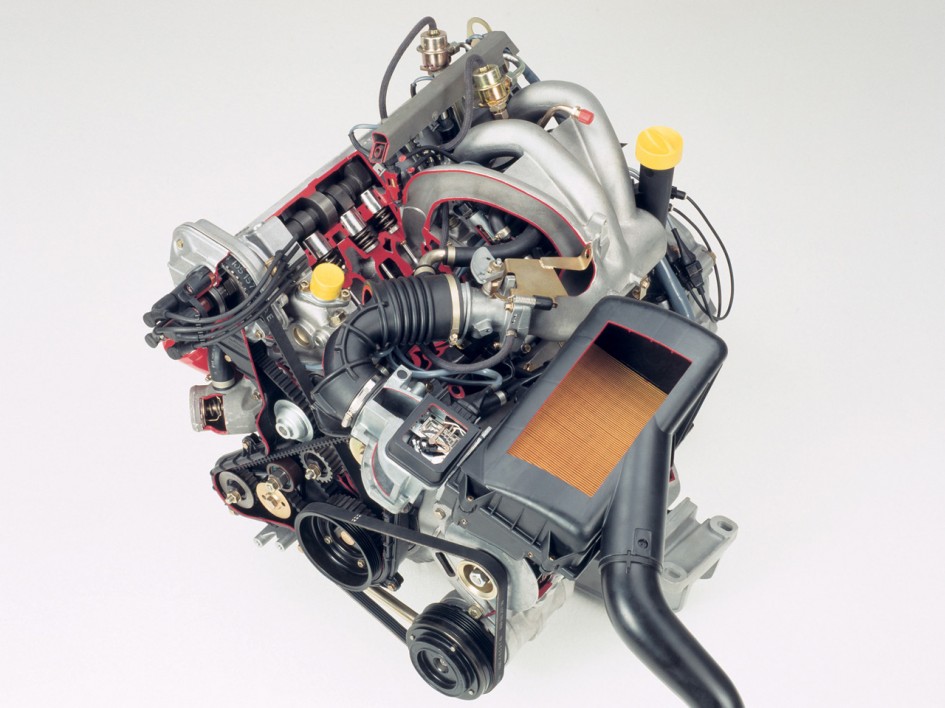 In this guide we will talk about tuning the 944 2.5 litre 8-Valve normally aspirated engines as found in the Porsche 944 and Porsche 924s models.

These engines are aluminium blocks with Alusil bores and an 8-Valve cylinder head with single overhead camshaft. The engine is very robust and under stressed and will do a great many miles reliably. This means there is plenty of room for tuning without needing to improve on the basis of the engine. To get an idea for the kind of improvements that can be measured we need a baseline for the torque curve for this engine. The manufacturer quotes versions figures for these engines but as a reference we have always used the same rolling road which has given very repeatable results. It is not recommended to directly compare the exact figures with those quoted by other manufacturers as there can be significant variability between rolling roads. It is fair to compare gains/losses however. We have seen differences on the same car on different rolling roads of nearly 20 horsepower. Typically these engines make in the region of 140-150 horsepower when tested on the rolling road we use. The first area with notable gains for this engine is making sure its physically in good health. These cars are now 20+ years old and there are often many original components. Many ask is the 944 reliable, the answer is yes, very, however most are really asking the question why is my 20 year old 944 unreliable? The answer is in reality the car has been very reliable for the last 20+ years but now needs a little TLC! Old fuel and ignition components sap power and throw out the factory tune reducing power, performance and reliability. Getting a proper check carried out on fuel rail pressure and carefully check over ignition components for signs of ageing is a good starting point.

The second stage in tuning is re-profiling the factory ignition curve and ensuring air fuel ratios are optimised. This can be achieved through chipping, upgrading or replacing the Engine Control Unit (ECU). It is best done on the rolling road to match the ignition map to the specific engine. Performance gains will vary depending on the specific engine but ~6-10 horsepower might be expected. This can be carried out in conjunction with removal of the air flow meter and a performance panel filter. With this done a few more horsepower can be achieved. It is not recommended to replace the factory airbox with a cone type filter. Our testing shows it gives no notable power increase, reduces low down torque, increase intake air temperature and makes a horrible noise!

A wasted spark ignition system can release several horsepower by allowing the use of increased spark plug gaps and improving the efficiency of combustion in the engine. This cannot be achieved with the factory ECU without modification. Typically cars also gain significant improvements to drive ability, throttle response and with closed loop fuelling as found on modified factory ECU’s such as our AugTronic system significant gains in fuel economy can also be made. 944 before and after tune with AugTronic, Wasted Spark and AFM Delete.

Following this a good next step is a re-profiled camshaft such as our Porsche 944 Road Race Camshaft. The factory cam profiles selected by Porsche seem to have been rather conservative, with room for improvements in power and torque across the board. We typically see 10hp from our road race camshafts with an improvement in low down torque as well. But the exact gains depend on the original camshaft fitted to your vehicle. Two camshafts are found in the 944 models, the 5R and 9R. The 9R camshaft offers slightly improved performance over the 5R.